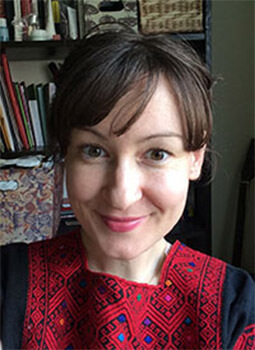 Professor Fojtik received her Ph.D. in Modern Europe and Women's and Gender History from the University of Wisconsin-Madison in 2013. Before coming to SXU, she taught at Carroll University in Waukesha, WI and at DePaul University. Her work has focused most recently on how postwar deprivation forced Germans to reconsider their place in a Cold War international order. Specifically, she is interested in the way that tensions between urban consumers and rural producers, as well as a loss of agricultural self-sufficiency, led to a reconsideration of Heimat and a reconstitution of national identities.

In addition to her responsibilities at SXU, she serves as the new books editor of H-German, an online community for scholars of German history, literature, and culture.

Ph.D. in Modern Europe and Women's and Gender History

"Growing the Future: the Debate Over Agricultural Reconstruction in the Western Zones of Occupied Germany, 1945-1950," Agricultural History (forthcoming).

"The Productive Heimat: Territorial Loss and Rurality in German Identity at the Stunde Null," Food, Culture and Identity in Germany's Century of War, eds. Heather Benbow and Heather Perry (Palgrave, 2019).