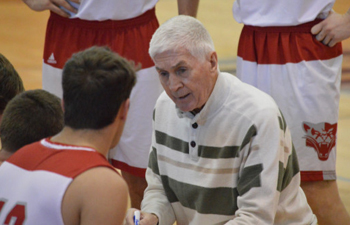 This year marks the twenty-second season on the bench for O'Malley, entering the season as the fifth-winningest coach in NAIA Division II. Under his watch, the Cougars have claimed three Chicagoland Collegiate Athletic Conference (CCAC) regular season titles; four CCAC Tournament crowns in 2001, 2003, 2010 and 2014; collected twelve NAIA Tournament qualifiers; and reached the quarterfinals of the 2005 national championship tournament. In 2001, O'Malley was inducted into the Chicagoland Sports Hall of Fame for his impressive coaching careering spanning over 50 years. O'Malley is also a member of the CCAC Hall of Fame, Illinois Basketball Coaches Association Hall of Fame, the Leo High School Hall of Fame, the Chicago Catholic League Hall of Fame and the Chicago 16-inch Softball Hall of Fame.

During Wednesday's competition against Holy Cross, junior guard Jaelon Wilson scored a career-high of 25 points to lead the Cougars as one of four players to score in double figures. Senior Tyler Diehl and sophomore Josh Niego both started and scored 17 and 16 points, respectively, while junior Jack Brody came off the bench to contribute 11. Saint Xavier would lead by as much as 14 in the first half after Wilson expanded the lead to a 32-18 score with a three-pointer made with just under six minutes left in the half. Holy Cross did make a few rallies, closing the gap back down into single digits more than once, but the Cougars remained in control.

Congratulations to coach Tom O'Malley! The SXU community could not be more proud of his very distinguished career and the young men he has led to five hundred victories.