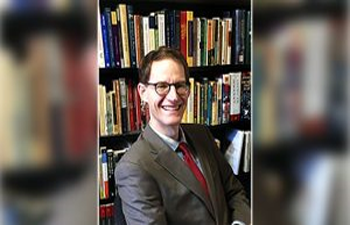 Dr. Peck and the other finalists were recommended to the Gettysburg College board from 113 book submissions reviewed by a three-person jury: James Oakes, Distinguished Professor of History and Graduate School Humanities Professor at the Graduate Center of the City University of New York; Elizabeth Varon, Langbourne M. Williams, Professor of American History at the University of Virginia; and Peter Cozzens, a prize-winning historian and former Foreign Service Officer.

"We are pleased to see these books -- the seven best works of the year on the Civil War period -- chosen as finalists for the Lincoln Prize," said Jim Basker, president of the Gilder Lehrman Institute of American History. "The Prize is in its 28th year and any of these outstanding books would make a worthy addition to our distinguished list of past Lincoln laureates."

The winner of the 2018 Prize was announced on February 12 -- the 209 anniversary of the famed president's birthday. Dr. Peck and his fellow finalists will be invited to an event in April hosted at the Union League Club in New York City, where the winner will be recognized and awarded a $50,000 prize and a bronze replica of Augusts Saint-Gauden's life-size busy "Lincoln the Man."

The Prize has been awarded annually to a work that enhances the general public's understanding of the Civil War era. It was co-founded in 1990 by businessmen and philanthropists Richard Gilder and Lewis Lehrman, co-chairman of the Gilder Lehrman Institute of American History in New York and co-creators of the Gilder Lehrman Collection.

Founded in 1994, the Gilder Lehrman Institute of American History is the nation's leading K-12 American history organization. The Institute's mission is to promote the knowledge and understanding of American history through educational programs and interactive resources for teachers, students and the general public. As a nonprofit public charity, the Gilder Lehrman Institute of American History is supported through the generosity of individuals, corporations and foundations. The Institute's programs have been recognized by awards from the White House, the National Endowment for the Humanities and the Organization of American Historians.

Congratulations, Dr. Peck on this tremendous recognition and your continued success in your chosen field.