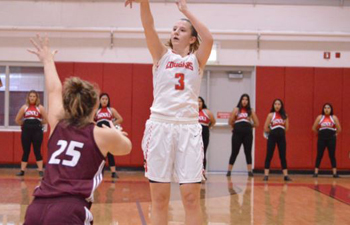 The Cougars took a 77-67 victory on November 24 over Wilberforce University (Ohio) as part of the Siena Heights Thanksgiving Tournament. Four players scored double-figures as Saint Xavier used a big first quarter to earn the win. Welter led the way for the Cougars, scoring 18 points; Chanel Fanter of Crystal Lake, Illinois was a rebound away from a double-double, posting 15 points and nine boards; Janie McCloughan of Geneva, Illinois set a new career high with 15 points; and Gabby Kreykes of St. John, Indiana finished with 13 points.

Saint Xavier scored 29 points in the opening period, the most scored in a single quarter in any game this season. Back-to-back three-pointers from Welter gave the Cougars a 24-11 lead will just over two minutes left. By the end of the end of the first half, the Cougars were commanding a 41-29 lead.

SXU is deeply proud of Welter's accomplishment and of all the young women representing the University both on and off the court.