Mercy participation during the Catholic Day of Action 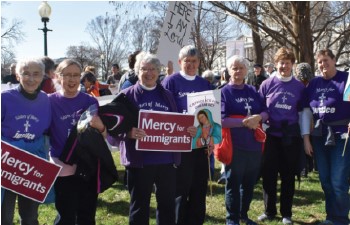 Nearly 20 Catholic groups, including the Sisters of Mercy, were represented during the Day of Action organized by Faith in Public Life and Faith in Action. Activities included songs, group prayers and chants. Representatives from the Sisters of Mercy based their participation on the event's connection with the Mercy Critical Concerns of Immigration, which instructs Sisters to "work for just and humane immigration laws, [and] a reduction in deportations that tear families apart."

Sisters Pat and JoAnn are co-founders of Su Casa Catholic Worker, a community-based sheltering organization for immigrants and refugees. All three play active roles in the Interfaith Community for Detained Immigrants, a nonprofit organization focused on advocacy for individuals affected by immigration detention.

Since the establishment of the Sisters of Mercy in 1831, the order has focused on "active compassion," trading internalized cloister life for direct interaction with the poor, the sick and the marginalized. Bringing today's issues to light through peaceful protest is a modern expression of this active engagement with the world.

The Sisters of Mercy of the Americas sponsor or co-sponsor 16 colleges and universities in the United States through the Conference for Mercy Higher Education, serving 34,000 undergraduate and graduate students. Saint Xavier University is a proud member of the conference.