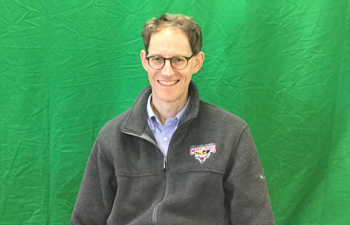 "A house divided against itself cannot stand. I believe this government cannot endure, permanently half slave and half free." Lincoln delivered these prophetic words in 1858 in an antebellum speech to his Illinois Republican colleagues.

On December 7, Saint Xavier University's (SXU) Graham Peck, Ph.D., visited Oak Lawn Community High School (OLCHS) to share his vast knowledge of Abraham Lincoln and the politics of the antebellum period with Patrick DiFilippo's AP United States history class. Over the years, Peck has stacked his scholarly and creative resume with numerous publications, a documentary and book on the antebellum era. His 2017 book, "Making an Antislavery Nation: Lincoln, Douglas and the Battle Over Freedom", uses the history of Illinois and the influential national roles played by Lincoln and Douglas to reinterpret the rise of antislavery politics before the American Civil War. "Making an Antislavery Nation" won the Russell P. Strange Memorial Book Award from the Illinois State Historical Society and was selected as a finalist for the 2018 Gilder Lehrman Lincoln Prize.

Peck's discussion with the students centered on creating a timeline of slavery issues from the Constitution to the beginnings of the Civil War, during which time the students had the chance ask and answer questions, work in groups, analyzed primary sources and drew meaningful connections between historical events.

"He really helped me expand my knowledge of this unit, especially when he went into detail about the debates between Lincoln and [Stephen] Douglas," said OLCHS junior Cara Stupay.

There are already plans for further interactions between Peck and OLCHS, providing future learning opportunities for both students and staff.