SXU Alumna Honored for Involvement in NASA's NEAR Mission 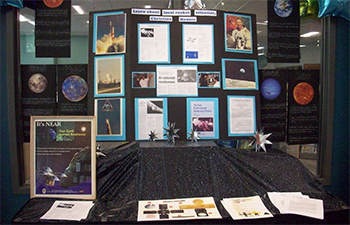 Saint Xavier University (SXU) alumna Christine Mouser '98 was recently honored for her involvement in NASA's Near Earth Asteroid Rendezvous (NEAR) Mission for the 50th anniversary of the moon landing. Fossil Ridge Library in Braidwood hosted a display commemorating her accomplishments as a rocket scientist.

The display featured information on her development of data visualization software, which interfaced with the NEAR satellite to take the data transmitted back to earth and create a 3D map of the A433 Eros. This software provided another level of analysis for project scientists as it was the first time that a man-made object orbited around and landed on an asteroid. The satellite will reside on the asteroid indefinitely. "It was a very exciting time and I felt like a celebrity," said Mouser. Mouser also wrote the hydrocode closing procedure for a computer program started by Albert Einstein.

Mouser was the first SXU student to be accepted by NASA. Majoring in mathematics, history and actuarial science, Mouser's lifelong dream was to become an astronaut. As a student with dyslexia, she was unfortunately disqualified for astronaut candidate school but was able to become an armchair astronaut as part of the Achieving Competence in Computer Engineering and Space Science (ACCESS) Program, which recruits students with disabilities. She worked for NASA in the Laboratory for Extraterrestrial Physics as well as the Laboratory for Astronomy and Solar Physics. The research and applications Mouser provided to NASA are the backbone for several high-end applications involving mapping and analytics. Mouser's work has been featured in several prominent scientific magazines.

Mouser credits SXU as the most important resource that enabled her to acquire the skills to achieve success in multiple areas. As a student, she was able to watch the Internet emerge from the computer lab. "Everything I know about computers I learned early on at SXU. SXU provided top-notch education and technical experience that allowed me to succeed at NASA," said Mouser.

Currently, Mouser is the owner and CEO of several companies that offer a range of services from setting up networks to setting up architecture for websites. She works on web design, database programming, graphic creation, forensic computer science and transportation technology research and development. She is also working with the Environmental Protection Agency on a water innovation project.

When asked what advice she had for students, Mouser said, "If there is an interest in becoming an astronaut, you can get in with a degree in math, biology or engineering. If you want to follow this pursuit, you definitely have the training available to you at SXU. I also recommend adding a history degree because you'll be exposed to a different kind of analysis."

Congratulations to alumna Mouser on her many scientific accomplishments!