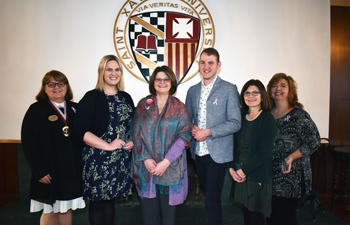 Saint Xavier University (SXU) annually presents three awards to well-deserving individuals whose exemplary service embodies the University's mission to "educate men and women to search for truth, to think critically, to communicate effectively and to serve wisely and compassionately in support of human dignity and the common good."

The Mother Paulita Morris, R.S.M., Student Mission Award recognizes a student whose exemplary service and leadership, both at SXU and in other educational, civic and religious communities, have embodied the University's core values. In this exercising of leadership and service, the students also embody the qualities of Mother Paulita Morris. Mother Paulita was a former member of the Board of Trustees, a religious leader and one who served those in need throughout her lifetime.

Two students were honored at the 2019 award ceremony, the first being religious studies major and winner of the Phi Theta Kappa Award Theresa Ward '19. Ward has served passionately as a Eucharistic minister, lector, singer and cantor in the McDonough Chapel's choir. At her home parish, she has served in a number of duties including catechist, lector, a minister of consolation and compassion for the grieving, and has volunteered to help organize a number of clothing and food drives. She cantors regularly for the Sisters at Mercy Circle and is the music minister at Christ the King Parish. Upon graduation, Ward plans to work as either a director of religious education or as a parish youth minister, working to make a difference with young men and women.

The second recipient was sociology major Bryson Ezra Doyle '19, who actively serves as a peer minister for liturgy, trains lectors and Eucharistic ministers, is a sacristan and writes the petitions for Mass in the McDonough Chapel and attends to these and many other duties associated with the chapel with energetic care. He is an active member of Saint Sabina Parish, has been intricately involved in organizing events and protests in religious and secular reams regarding social justice and activism. While handed his award, he spoke of his deep love and appreciation for SXU and the Sisters of Mercy and made a very passionate speech calling for all members of the community to help and improve each other to work for a better world.

The Sister Isidore Perrigo, R.S.M., Staff Mission Award recognizes a staff member whose service to the University community has embodied the University's core values in ways that contribute to making SXU a better place to study and learn. Their exercising of service reflects the kindness and compassion of Sister Isidore Perrigo, who staffed Saint Xavier Academy's "candy department" for 20 years and was known for the care and concern she shared for all those who crossed her path.

Two staff members were honored at this year's award ceremony, the first being Mary Rita Insley. Insley is an SXU alumna who earned a degree in mass communication and sociology in 1984 and a Graduate Certificate in Pastoral Studies in 2008. Insley has been described many times over as affectionate, helpful, hospitable and loving to all who come into the Mercy Ministry Center. In addition to her role as coordinator of the Mercy Ministry Center, Insley is the advisor of the pro-life club on campus and is wholly devoted to the Sisters of Mercy. Outside of SXU, she also volunteers as a minister of care and at BEDS Plus homeless shelter.

The second recipient was Jodi O'Toole, a graduate of Eastern Illinois University who now works in the SXU Office of Records and Advising. In her daily work, O'Toole works with transfer student records to post equivalencies for credit from other institutions. She works diligently with department chairs and faculty to give students the best possible outcome for coursework. O'Toole also assists with planning events for the Tau Sigma National Honor Society for transfer students and executes collection drives on campus for Misercordia Candy Days. Off campus, she spends her time volunteering with Almost Home Foundation and BEDS Plus.

The third and final award to be presented is the Saint Xavier University Faculty Mission Award, which recognizes a faculty member who, through teaching, scholarship and service, has furthered the mission of the University and who has consistently embodied the University's Catholic and Mercy identity by "serving wisely and compassionately in support of human dignity and the common good."

The 2019 recipient was Associate Dean for Undergraduate Nursing Programs Zepure Samawi, RN, Ph.D. Initially drawn to SXU by her faith and personal commitment to service and compassion, Samawi's accomplishments are numerous and multi-faceted. Most recently, her and fellow faculty member Nathan Peck were chosen as Lilly Faculty Fellows. Their program "Inspired by Mercy: Scholarly Conversations on the Sisters of Mercy Critical Concerns" will engage colleagues from across all disciplines at SXU. Samawi is also a member and key contributor of the General Education committee and serves as a member of the Illinois Equity in Attainment Initiative team, which seeks to eliminate racial and socioeconomic achievement gaps in college completion rates by 2025. In close connection to her nursing background, she continues to work with Convoy of Hope, a faith-based, humanitarian organization that helps empower others to live independent lives free from poverty, disease and hunger.

SXU is eternally grateful for the tireless work given to the University and the community by all the 2019 Mission Day Awards recipients. The University is honored to have such determined and dedicated students, staff, faculty and alumni!