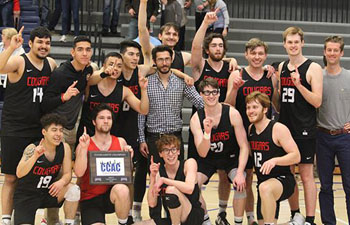 Behind 13 kills from junior Ben Gabor and another 11 from freshman Kyle Springer, Saint Xavier University's (SXU) men's volleyball team claimed their first-ever CCAC Tournament championship on April 6, defeating top-seeded and hosts St. Ambrose University in three close sets with scores of 25 to 21, 25 to 23 and 29 to 27.

The SXU Cougars (20-7) are the third program to claim the CCAC Tournament title, in the fourth season of competition. The championship is also the first for the Saint Xavier program in any conference.

Junior setter Aaron Kummer collected 34 assists in the win, along with one of the team's two service aces and four digs. Sophomore Ryan Gossett anchored the SXU defense with a team-high ten digs in the win.

In the opening set, SXU never trailed but were also unable pull away, taking a five-point lead at 22-17 with a kill from sophomore Justin McCarthy as their largest advantage of the set. The St. Ambrose Bees (15-10) held off a pair of set points, before Kummer and senior Elonas Marcauskas teamed up for a block at 25-21, giving SXU the early lead.

The Cougars jumped out to a 7-3 lead to start game two, with a pair of kills and another block from Marcauskas in the early moments. St. Ambrose would respond midway through the set, scoring a 9-3 rally that turned a four-point SXU lead into a 20-18 advantage in favor of the home team. Back-to-back attacking errors would tie the score again at 20-20, and both sides would remain deadlocked at 23-23, when a service error and attacking error gave Saint Xavier the 25-23 win.

Springer and Kummer each recorded kills at the start of game three as the Cougars went up 4-1 at the start of the set. Leading 7-6 later on, SXU scored five in a row, with kills from three different players, to stretch the lead to 12-6.

St. Ambrose would quickly tie the game at 15-15, going on a 9-3 run, and eventually lead 19-17, forcing a Cougar timeout. McCarthy would get a kill out of the break, and a block from junior Andrew Bergstrand and McCarthy would lead to a 21-20 SXU advantage. The Bees came back with three points in a row to go back up 23-21, but a kill from Gabor, and a block from Marcauskas and Kummer led to match point for the Cougars at 24-23.

The Bees would extend the match by winning four straight match points, but were unable to regain the lead. Gabor set up the team's fifth match point with a kill at 28-27, and McCarthy finished off the tournament with a kill on the following play.

Saint Xavier now advances to the 2019 NAIA Men's Volleyball National Championship, held from April 16-20 in Des Moines, Iowa. The championship schedule and match times will be released by the NAIA in the coming days.