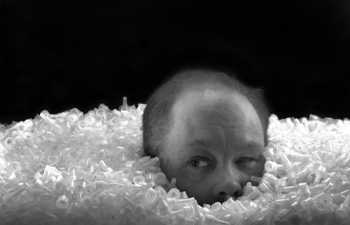 "The Eyes Have It" - Karl Smith in diabetic pen needles

Saint Xavier University (SXU) alum Karl Smith '92 recently documented his life as a diabetic in an exhibit, "Punctuation: 35 Years of Diabetic Debris," at McLean County Arts Center in Bloomington. Comprised of a collection of photographs, the exhibit's very first picture dates back to Smith's time at Saint Xavier.

Smith's exhibit uses depth of field and follows his life from diagnosis as a Type 1 diabetic to organ transplant at age 50. The debris in the photos includes medical supplies, including syringes, glucose testers, hospital wristbands and insulin bottles, all which he has used to treat his diabetes since he was a teenager. Other photos in the exhibit show a glimpse of his life after receiving kidney and pancreas transplants, including photographs of his organ donor's family. The complete series is also featured in Smith's book of the same title.

"This collection has gone from one photo taken in the 1990s to over 40 images. People who visited the exhibit had the opportunity to see the artwork as I intended – life-size. In just a couple years, it will be 40 years since I was diagnosed as a diabetic, and 5 years since I received a kidney and pancreas," said Smith.

Smith hopes that those who visited his exhibit and perused his book are able to take away the significance of the life of a diabetic.

"There's a number of things people can take away from this exhibit. Most people don't realize what is involved in maintaining and treating a chronic disease. Looking at the sheer quantity of syringe caps and insulin pen needles, I estimate I have given myself over 22,000 shots, which doesn't even include going in for blood work. Another thing to consider is that it isn't free. When you're spending the price of a mortgage every month just to stay alive, that impacts your financial life and your family," said Smith.

Pre-pandemic, Smith was also working on a series focused on faces, where he would use Rembrandt-style lighting and shallow depth of field to focus on the face, the most important part of the image. For him, it's a marker of time, as the faces change over the six years he's been working on it. He also worked on another series on social media, where he encouraged people to share photos of places they've been without them in it, focusing on architecture, natural landscapes and more.

Smith is also a web developer for a major corporation and is grateful he gets to use his art skills in photography, design, layout and coloring, much of what he learned during his time at SXU. He was initially a physics major at Wesleyan University before transferring to SXU, where he was considered a non-traditional student but realized how much he enjoyed taking and how skilled he was in art classes.

"It was far more deliberate than being an art major. Photography and optics are physics. Processing film in the darkroom is chemistry. I had a good foundation in science, which helped with my art," said Smith.

At Saint Xavier, Smith feels he learned to be a better student, and the inspiration and knowledge he received from his professors remains relevant today.

"I cannot overstate enough the impact my art professors, Monte Gerlach and Brent Wall, had on me. In my very first photography class in the fall of 1987, Monty said, 'Why can’t journalistic photography be artistic and why can't photography tell a story?' That lesson that I got in the first few minutes I still carry today. Brent, my drawing instructor, would always encourage me to push things a little further, to go beyond good enough," said Smith.

Smith also fondly remembers the "Zen Vegetarian Lunch Hour" at SXU, where art students would get together at a huge table and spend time with other artistic and creative minds.

After graduating from SXU, Smith studied photography, filmmaking and video production and honed his skills in wedding photography, corporate video and screenwriting before studying web design. Smith often takes on new art projects, as he enjoys experimenting with new things. He even did a comic strip for two years. He believes experimentation and challenge keeps things interesting and he gets the most joy out of art.

Next up, Smith hopes to do a children's book based on a funny story his mother-in-law told him, both comedic and profound.