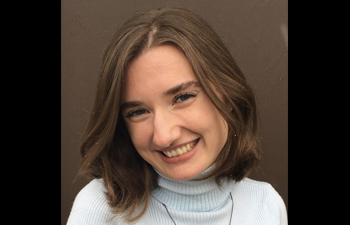 Saint Xavier University (SXU) psychology student Lauren Banicki has received the Mamie Phipps Clark Research Grant, a grant intended to highlight research projects by International Honor Society in Psychology (Psi Chi) students and faculty advisors focusing on diverse populations and issues. Only 50% of the proposals submitted were funded, and Banicki will use the grant to fund participants for her project, an essential part of her important research.

"I became interested in skin tone and attractiveness after reading about how beauty standards seem to be stringent for women, especially Black women. I wondered if beauty standards, specifically those related to skin color and tone, have a more cultural or evolutionary basis," said Banicki.

Banicki's project examines the pervasiveness of skin bleaching among people of Asian and African descent and skin tanning among people of European descent and how some people practice skin tone alterations as an attempt to increase their attractiveness. They explain the phenomena with two competing hypotheses: One focuses on cultural practices and predicts Black and East Asian participants will rate same-race targets with light skin tones as more attractive and healthier relative to targets with darker skin tones, whereas white participants will rate same-race targets with dark skin tones as more attractive and healthier. The other hypothesis focuses on ecological adaptability and predicts that moderate skin tones may signal genetic diversity or ecological adaptability, so participants will prefer targets with moderate skin tones across perceiver and target races.

Banicki will use an online sample of Black, East Asian and white adults from the United States to rate the attractiveness and health of Black, East Asian and white faces manipulated to vary in light, medium and dark skin tones. Implications for the study include understanding current cultural practices and other downstream consequences. Banicki hopes that by using the grant for participant payments, she will be able to collect data for a second study that bolsters the results from her first study.

"I hope to understand if, among our sample, preferences for certain skin tones exist. These results will then hopefully lend evidence to either a cultural or evolutionary explanation for these preferences" said Banicki.

Banicki chose to major in psychology because of her love for statistics and the social sciences. She believes understanding human behavior is the key to answering many questions about who humans are as people. She has greatly enjoyed her experience as a psychology student at SXU.

"The Psychology Department as a whole is very strong, and I have learned so much from all of my psychology courses. My research experience with Dr. [Angela] Pirlott has been of utmost importance and is what made me realize I want to pursue a doctorate in psychology," said Banicki.

"Receiving the Psi Chi research grant is a big accomplishment. Fewer than 50% of proposals were funded, which shows both the competitiveness of the grant and of Lauren's proposal. In addition, the grants are only awarded to Psi Chi members. Psi Chi's membership is limited to the top psychology students at each university, which again shows the competitive nature of the grant. I hope that receiving this grant foreshadows Lauren's success in eventually getting the project published," said Pirlott.

Banicki, who is president of the Green Movement, Saint Xavier's environmental organization, and a member of SXU's Honors Program, plans to apply to Ph.D. programs in social psychology this fall, hoping to work in programs focused on gender and sexuality.