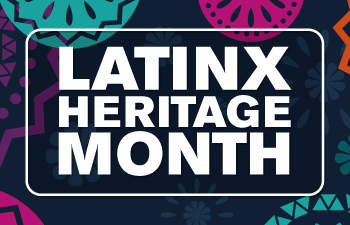 Latinx Heritage Month celebrates the histories, cultures and contributions of American citizens whose ancestors came from Spain, Mexico, the Caribbean, and Central and South America. The observation began in 1968 as a week under President Lyndon Johnson and was expanded by President Ronald Reagan in 1988 to cover a 30-day period beginning September 15. September 15 is significant as it celebrates the anniversary of independence for Latin American countries Costa Rica, El Salvador, Guatemala, Honduras and Nicaragua.

SXU is proud to be recognized as a Hispanic-Serving Institution (HSI) and provides opportunities for growth to Hispanic students while celebrating their culture and tradition with the whole SXU community. Students have the opportunity to participate in building SXU's HSI identity and history through a variety of academic, cultural, leadership and other professional organizations.

"We’re very excited to be launching our calendar of activities for Latinx Heritage Month during National HSI Week, which celebrates all of the amazing work that HSIs everywhere are doing to ensure underserved students have access to higher education, equitable practices and pedagogies, and initiatives that enhance their academic and career pathways. This year’s Latinx Heritage Month calendar of events is filled with activities and opportunities for students and staff to celebrate and learn about the different traditions and dimensions that are part of our Latinx student identities. We encourage the entire SXU community to participate and be part of this wonderful month filled with pride that honors the cultures, contributions and resilience of Latinx people everywhere," said Imelda Macias, Title V director.

Please join us throughout September and October to learn, grow and celebrate!

All month long, the SXU community can visit the Robert and Mary Rita Murphy Stump Library in person or online to view a curated collection of books, films, documentaries, and information on cultural centers and museums around Chicago that celebrate the work and contributions of Latinx communities.

Students can submit their entries for a chance to paint a mural in an SXU hallway, keeping in mind the theme, the "Best of Latin American Culture."

The SXU community can submit their drawings of an SXU Lotería playing card. Participants will choose from a list of 54 categories to create the Lotería card.

Who has the best Mexican grito (yell)? Join us on the Quad to find out!

Students can create posters on inspirational Latinx people at noon in the Wiseman Student Lounge!

Join us in the Pacelli Hall lounge at 6 p.m. to play Lotería with the Residence Hall Association. There will be multiple rounds of Loteria, prizes, candy, music and much more.

The SXU community is invited to represent SXU at the traditional South Chicago Mexican Independence Day Parade at 11 a.m.

Students and staff will have the opportunity to submit sayings and colloquialisms from Latin American countries in the SXU Diner. All submissions will be on display in October to showcase the richness of the cultures and language.

Join us at 3 p.m. in the Butler Reception Room, where we will teach the Latin American culture through various genres of well-known dances to faculty, staff, and students.

Foreigners in Their Own Land PBS Episode and Discussion – Tuesday, September 20

Join us at noon in McGuire Hall to explore the period from 1565-1880, as the first Spanish explorers enter North America, the U.S. expands into territories in the Southwest that had been home to Native Americans, English, and Spanish colonies, and the Mexican-American War strips Mexico of half its territories by 1848.

Join us at 1 p.m. in McGuire Hall for a session for SXU students, staff, and faculty to learn about immigration law and how we can all support each other.

The SXU community can gather and represent SXU at the 7 p.m. White Sox game!

Tables with representatives from different departments to build awareness of the many resources available to students will be set up at noon in the SXU Diner.

Join us at 2 p.m. in McGuire Hall to learn how the American population became reshaped by the influx of people that began in 1880 and continued into the 1940s, as Cubans, Mexicans and Puerto Ricans began arriving in the U.S. and started to build strong Latino-American communities in South Florida, Los Angeles and New York.

Join us in the SXU Diner at noon to gather and mingle over Cheetos.

Join us with your families from 5 to 7 p.m. outside the Mercy Ministry Center to hear from SXU President Laurie M. Joyner and enjoy food trucks, music and games! Registration is requested.

Join us at 7 p.m. at McDonough Chapel for the beginning-of-the-year Spanish Mass for students, families and the SXU community.

Join us at 5 p.m. in McGuire Hall to explore the creation of the proud "Chicano" identity, as labor leaders organize farm workers in California and activists push for better education opportunities for Latinos, the inclusion of Latino studies, and empowerment in the political process.

Come out to a tailgate event at 7 p.m. on the SXU campus to cheer on the soccer team!

Join us at 2 p.m. in McGuire Hall to discuss the World War II years and those that follow, as Latino Americans serve their new country by the hundreds of thousands but still face discrimination and a fight for civil rights back in the United States.

Students can come help build the Day of the Dead Altar outside of the Butler Reception Room from 3 to 6 p.m.

Students can play Lotería while having their lunch at noon in the SXU Diner.

Come watch the movie "Selena" at 6 p.m. in McGuire Hall.

Saúl Flores: The Walk of the Immigrants – Wednesday, October 12

The SXU community will get the opportunity to relive the Walk of the Immigrants and create a deeper understanding of the struggles, hardships, joy and hope that immigrants experience on their journeys at noon in McGuire Hall.

Join us at 4:30 p.m. in the Fourth Floor Boardroom for a panel of Latinx students, staff and alumni.

Join us at 3 p.m. as participants introduce their murals and the contest winner is announced!

Join us at 1 p.m. in the Butler Reception Room for a ceremony honoring our Latinx stars.

Adriana Del Olmo from the Counseling Center will be presenting on belongingness and self-exploration at 10 a.m. in the Wiseman Student Lounge.

Join us at 3 p.m. in McGuire Hall for an episode that takes viewers through the past 30 years, with a second wave of Cubans arriving in Miami during the Mariel exodus. With hundreds of thousands of Salvadorans, Nicaraguans and Guatemalans fleeing civil wars, death squads and unrest to go north into a new land, they transformed the United States along the way.

Join the SXU community at noon in the Butler Reception Room or at 7 p.m. to discuss the month’s book club choice, "For Brown Girls with Sharp Edges and Tender Hearts: A Love Letter to Women of Color."

Students can visit the Mexican Fine Arts Museum in Pilsen at noon. Transportation will be provided.

Adriana Del Olmo from the Counseling Center will be presenting on the relationship between grief and el Dia de los Muertos at 10 a.m. in the SXU Diner.

SXU is proud to recognize its Latinx students all year long and looks forward to continuing to share cultural exchanges throughout the year!