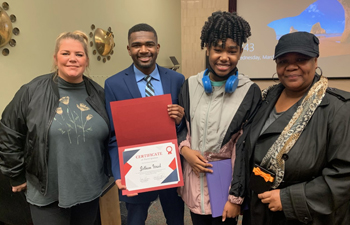 Saint Xavier University's (SXU) Communication Department recently hosted the biannual COMM 101 Speech Competition. Participants include students from each section of the course who have been selected, voted or requested to participate by peers and faculty to deliver an informative speech for a chance to win prizes.

"Not only does this give the presenting student the opportunity to deliver their speech on stage in front of a large audience, it gives the students watching the opportunity to see their peers shine – doing something that many adults wouldn't be able to do! It’s always wonderful to see how supportive the students are of their peers. In fact, this semester, we had both the men's and women's bowling teams there to support their teammate, as well as an English class to support their classmate. It's really exciting," said Cyndi Grobmeier, communication professor.

"The speech competition along with the speech fundamentals course is such an important part of the Communication Department. The competition gives students that really excel in speaking and presenting an extra opportunity to shine and each student a chance to hear what their peers have to say," added Katie Denny, communication professor.

Students are selected to represent their class based on well-developed and polished presentations. This semester, students did a phenomenal job. Six students competed with various topics: Monica Darrow, The Hypocrisy Between Male and Female Fans; Courtney Bowes, OCD Beyond the Stigma; Shemaiah Walters, Racial Bias in Healthcare; Jotham Israel, The Superbowl Halftime Show and How it Has Become Part of American Culture; Ali Abdelrahman: The Legal Larceny of the Modern Era, Harvesting Your Data; and Jaren Orbeck, The Creation, Distribution and Effect of Vaccines.

This semester's winner was Jotham Israel, a freshman communication major with minors in film and media studies. Israel compares speeches to telling stories he's passionate about. He knew that he could have fun with his speech since it wasn't centered around a heavy-hitting topic, and since he's a sports fan, he found the speech easy to memorize. He used only one index card for the speech, which included his sources and statistics, but everything else came straight from his heart. He thoroughly impressed his audience.

"I truly value Jotham as my student. Other students see him as eager to present his speech and he delivers so well he inspires his peers to strive for excellence. He really brings a great camaraderie to our class," said Denny.

"Jotham's speech took a topic we often take for granted and really showed us how it has influenced our culture. He used examples and statistics to build a timeline that proved what a phenomenon the halftime show has become – in some cases, more popular than the game itself. Plus, he has a naturally humorous and engaging delivery style that makes his speech entertaining as well as informative," added Grobmeier.

Israel feels that participating in competitions like these and what he is learning in his communication classes is giving him confidence to step into the spotlight and be one of the best in the business.

"This competition gave me a chance to make my presence felt in a room. I learned not only how to grab the audience's attention, but to hold on to it throughout the duration of my speech. COMM 101 has taught me how to work with different audiences in different environments," said Israel.

Israel loves communication and speech because he feels he has a voice that yields respect. Though many might find having all eyes on them intimidating, Israel loves those moments.

"There aren't many things better than having a good light being shone upon you. My character revolves around emotion and expression, two major components of communication as a whole. I have a blast communicating," said Israel.