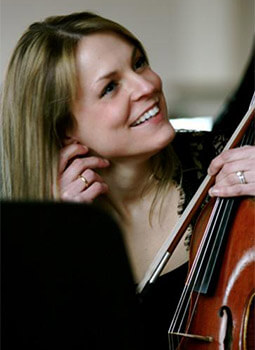 Heather J. Carlasare, a native of New York, was born into a very musical family. Both of her parents are professional musicians and she was brought up in the classical tradition at an early age, starting violin lessons at the age of seven. She attended the LaGuardia High School of Performing Arts in Lincoln Center, graduating in 1999, and decided to make the switch to viola when entering college. Carlasare completed her baccalaureate degree in viola performance at the Manhattan School of Music in May 2003. While at school, she had the opportunity to travel with the orchestra on a Venezuelan Tour (playing under Gustavo Dudamel and his El Sistema orchestra) and studied under such great conductors, such as Kurt Masur, Gunther Schuller, Michael Stern and Leonard Slatkin. Her teachers and coaches included Karen Ritscher, Karen Dreyfus, Pamela Frank, Heidi Castleman and Sylvia Rosenberg. She was also the assistant orchestral music librarian for many years.

Carlasare began her studies at the Indiana University Jacobs School of Music in 2003 with a full scholarship under the tutelage of Alan DeVeritch. While there, she was the graduate assistant to the String Department for some time. Completing her performer diploma in 2006, she decided to pursue a master's degree and graduated in December 2008. She has also studied with Yuval Gotlibovich, Helen Callus and Atar Arad in addition to having performed with Joshua Bell on several occasions.

In addition to performance, Carlasare has always had a deep love of teaching music. Starting in 1998, she was a private instructor at the Victory Music Studio in New York for many years. At Indiana University, she enjoyed studying under famed string pedagogue Mimi Zweig. After marrying pianist Mario Carlasare in August 2009, Heather moved to Illinois where she accepted a teaching job at The Music Connection in Orland Park, Illinois and Frankfort, Illinois. At The Music Connection, she teaches weekly Suzuki Violin and Adult Strings Groups, along with a full private studio. Carlasare completed her Suzuki Violin Books 1-3 training with Edward Kreitman.

In addition, Carlasare enjoys many freelance opportunities, performing extensively for many different orchestras. She has played at Carnegie Hall and Avery Fisher Hall numerous times. In June 2008, she completed a tour of South Korea with the New Jersey Philharmonic. She was invited to play with the Philharmonic Orchestra of the Americas for a special concert in Avery Fisher Hall in 2008 as well. Since moving to Illinois, she has played with the Illinois Philharmonic Orchestra numerous times as well as the International Chamber Artists, Northwest Indiana Symphony Orchestra and Southwest Symphony. She is a founding member of the Chicago-based Chicago Camerata, comprised of musicians from the Lyric Opera Orchestra and Grant Park Symphony, as well as a founding member of Chicago String Progression, a wedding string quartet. Recent highlights include performing the Dittersdorf Sinfonia Concertante for viola and bass with the Southwest Symphony and joining the Trans Siberian Orchestra at the Allstate Arena for their winter tour.