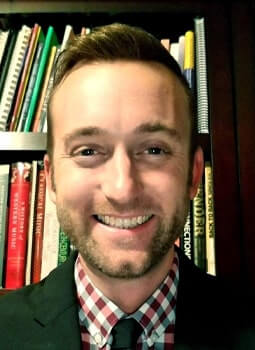 Since joining the Dwight D. Eisenhower High School staff in 2009, Antos took an instrumental music program of one band of just over 40 students and transformed it into three curricular bands, two curricular orchestras, and a guitar program, now serving a total of over 300 students. His concert bands, marching bands, jazz ensembles, and orchestras have earned numerous first-place finishes and Division I ratings at various state and national festivals over the past several years. Antos also conducts the high school's award-winning show choir combo, musical pit band, mariachi band, and pep band, and facilitates 15 different chamber ensembles.

Since 2014, Antos has also served as an adjunct professor of music at Trinity Christian College in Palos Heights, Illinois. Throughout his career, Antos has taught music full-time to students ranging in age from Pre-K through undergraduate school in the domains of band, orchestra, choir, and general music.

In addition to his teaching responsibilities, Antos is a respected scholar who has published several articles in practitioner and academic journals and has presented at numerous music education conferences throughout the United States. He has received prestigious awards from The University of Chicago, Auburn University, VanderCook College of Music, and Saint Xavier University for his work in music education and was a national finalist for the 2021 Grammy Music Educator Award. Moreover, Antos frequently performs as a freelance percussionist and studio musician in the Chicagoland area and operates his own home recording studio, where he provides free demo recordings for up-and-coming artists.

Antos is currently endorsed in K-12 Music and K-12 General Administration in Illinois and holds National Board Teaching Certification in Instrumental Music Education. He volunteers extensively in the Blue Island community, serves on Dwight D. Eisenhower High School's leadership team and equity committee, mentors teachers, designs and facilitates professional development opportunities for colleagues, and donates to families in need and other charitable organizations as often as possible.