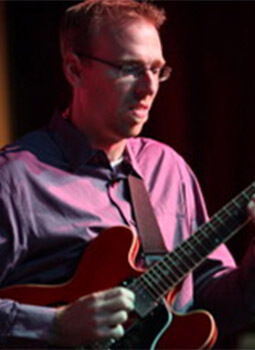 Shawn Salmon, D.A., is the director of jazz studies for the Music Department at Saint Xavier University in Chicago, Illinois. In addition to heading the Jazz Studies and Studio Guitar Programs at SXU, Dr. Salmon directs of the SXU Jazz Ensemble, Jazz Combo and Guitar Ensemble.

Dr. Salmon graduated with a B.A. in jazz studies from Eastern Illinois University, where he studied with guitarist John McLean. Dr. Salmon moved to Chicago to complete a master's degree in jazz studies at DePaul University. During this time, he studied with jazz guitars Bob Palmieri and John Moulder, as well as composition and arranging from Thomas Matta. After graduation Shawn taught guitar at the Chicago City Colleges as well as his own private studio. During this time Shawn also stayed active leading his own jazz trio and working regularly throughout the Chicago at such venues as The Park West, Pete Miller's, and The Hot House.

In 2007, Dr. Salmon moved to Muncie, Indiana, to pursue a doctorate of arts in guitar performance and composition from Ball State University. While living in Indiana, he continued to perform regularly with his own trio and was able to play at some of Indy's top jazz venues, including The Jazz Kitchen and The Chatterbox Café.

After returning to Chicago, he joined the Tenor Madness, a jazz-funk-fusion quintet that perform several original compositions by Dr. Salmon. Tenor Madness released their debut album "Convergence" in 2016. Dr. Salmon and Tenor Madness have performed at The Jazz Showcase, Andy's Jazz Club, The Green Mill, The Wire, Reggie's, and for the 8th Annual Chi-town Jazz Festival and the 2016 Jazz Institute Chicago Jazz Festival Jazz Club Tour.