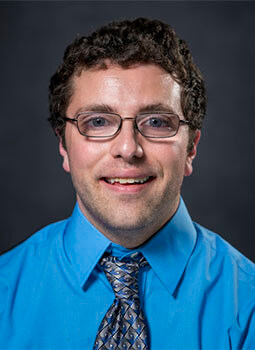 Dr. Gregory DeGirolamo earned his Ph.D in Psychology with a focus in Developmental and Cognitive Psychology from the University of Nebraska-Lincoln in 2018. He also completed an M.S. in Experimental Psychology with a focus in Behavioral Neuroscience from Cleveland State University in 2012. Dr. DeGirolamo was a postdoctoral fellow in the Department of Neuroscience at the Cleveland Clinic from 2017-2019 before starting at SXU in fall 2019.

Dr. DeGirolamo's primary research examines how different aspects of spatial cognition change across the lifespan. He is especially interested in spatial memory and the factors that influence how we remember locations, form mental maps, and navigate the world around us. In terms of development, Dr. DeGirolamo's main focus is interested in the factors that influence how spatial memory changes from young adulthood through old age and what separates healthy aging from clinical aging (e.g. why do some people develop Alzheimer's while other people do not). He is also open to researching how spatial memory changes in childhood and adolescence.

A second research interest of Dr. DeGirolamo is using EEG and biological techniques to study how the brain and behavior develop. Dr. DeGirolamo has also done research on how spatial memory changes in adolescence, the use of deep brain stimulation to treat motor deficits caused by stroke.

Please email Dr. DeGirolamo (degirolamoFREESXU) if you are interested in conducting research with him.